A system of notations is a set of graphic symbols, with rules of assembly and coherence, and in relation to a universe of knowledge and practices. There is an immense variety of notation systems, each adapted to its own universe. 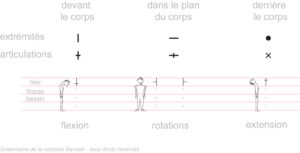 and an example below:

The quality of a notation system:

Given the examples above, it is easy to understand the expected qualities of a good and efficient notation system:

The notation systems evolve according to a Darwinist principle towards conciseness and efficiency: for example the elegant Gothic writing has been gradually replaced by a cursive writing much simpler and faster to write.

KM2: a new system of notations for knowledge

Traditional linear writing was invented by the Babylonians to transcribe discourses (intrinsically linear because of the time used by speech). But this writing is not a universal or practical mode for expressing knowledge: ideas are not connected linearly with one another. Basically, linear discourse is NOT the proper system of representation of knowledge, as we have just shown the above variety.

KM2 proposes a new system of notations: the cognitive schemes (or GHS notations), much better adapted) the representation of knowledge and processes. This change in notation must be accompanied by the tools that allow to manipulate these cognitive schemes efficiently and in large numbers, on an individual or team scale: the KM2 tools.