There is no doubt that the AlphaZero algorithm [1] is a huge step forward for solving board games (like chess and go), and that numerous non-game applications for optimizations can be derived from this idea and implementation. As for any algorithm, it is intersting to find the limits and discuss performance issues. In an earlier post, we have discussed the very slow learning rate (as compared to human) of AlphaZero.

We discuss here the loop-game, as a board game which is both simple and intractable to AlphaZero, while a simple mathematical analysis can provide the winning strategy.

It is complicated to summarize all the feature  of the AlphaZero algorithm [1] in a few sentences, but in a simplified manner:

Board games like chess and go share a common feature that winning games can be patiently built, but any wrong move can change the final result of the game.

A physical image clarifies the concept : AlphaZero identifies and walks over crests of mountains toward the top. While on a crest, going up is easy, and it is easy to step aside and loose the game. Otherwise, if not on a crest, a lookaround view (MCTS) can give enough information to find the nearest crest : 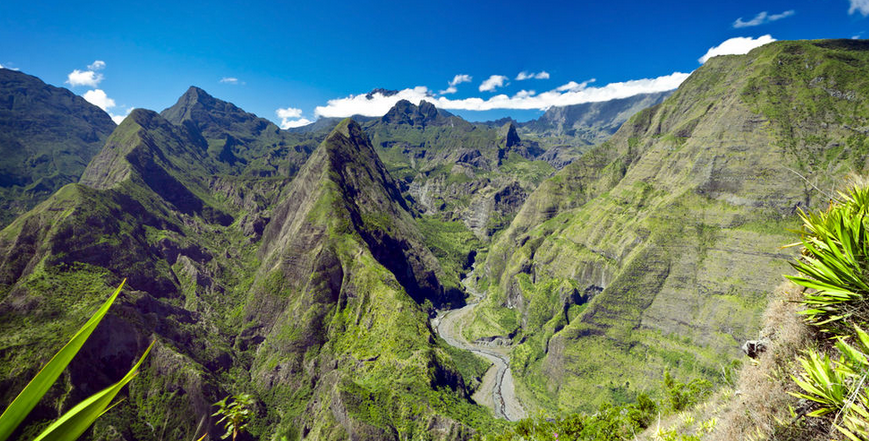 In doing so, we can easily understand that AlphaZero does not need to explore and map the whole territory : an efficient coding of the crests is sufficient to go to winning positions.

So the neural network which is built by AlphaZero identifies the crests from winning and losing positions. We should not be surprised from this identification, since recognizing patterns is what neural network do the best : as a first approximation, recognizing a win/loss position is computationally the same as reading a matrix to recognize letters.

Here the ‘magic’ of AlphaZero is to be able to identify efficiently those crests. We should not however overestimate the speed of learning of AlphaZero, which appears to be 400 times slower than humans [3].

The loop-game is a 2 player playing in sequence (player 1 plays 1st, player 2 follows.). The game starts with a simple board of size 2Nx2N : 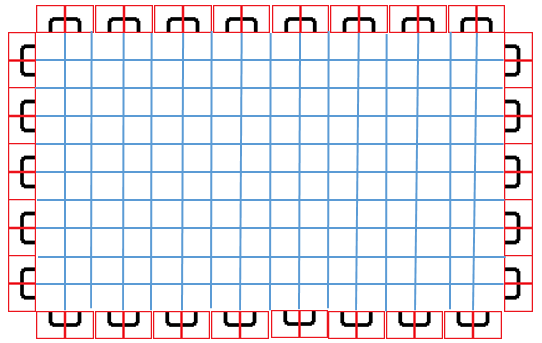 Each player may choose to set anywhere on the board of the 3 types of tiles a,b and c, with two black segments each:

Tiles are not moved neither displaced, tiles can not be stacked.

For example, an intermediate board position could be : 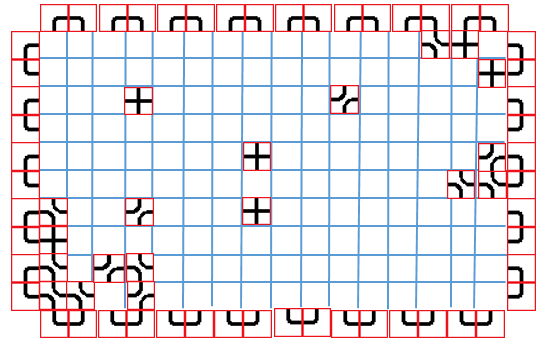 At the end of the game, all tiles are placed, and the black segments are connected forming loops, which have been closed either by player 1 or by player 2 by setting a tile on the board : 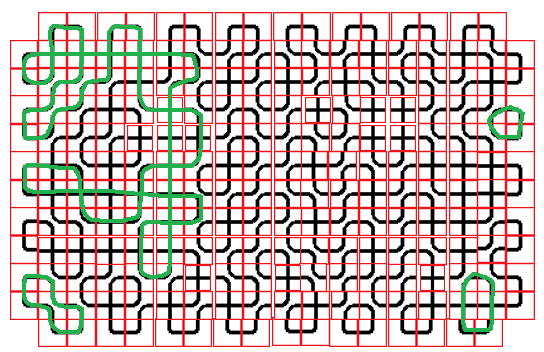 We consider the 2 variants of the game, defined with the following winning goals :

Analysis and winning strategy for the loop-game

The analysis is very simple : player 2 always wins or draws :

As a consequence for the loop-game, no intermediate position will give a hint on the future winner : only the last player wins or draws. In our former image of mountains, the loop-game is a totally flat world, with singular peaks and abysses at the end of the game and no crests.

This means that AlphaZero will not find its way toward a winning position.

No oracle as well …

But furthermore, if we look at the final position, we conclude that neural networks will find a very hard time to identify if a final position is a win or a loss. The computation of the number of loops is very easy by a program (oracle), which (even) takes N as a parameter. However, if we want to build an oracle for the loop game with a learning method, just by showing final positions and a win/loss classification using neural methods, this is going to be very difficult for several reasons [4]:

The AlphaZero algorithm is very interesting, and understanding its possibilities and limits may lead to future better algorithms. With this objective, we have found that AlphaZero does not solve an elementary board game which we have presented, and does neither generalize learning nor work for high sizes of the game. The existence of a valuation function growing monotonically with the advance of the game seems a prerequisite. In that direction, we must continue to investigate properties of search algorithms. The loop game, very simple, allows to quick check strategies, while the rules can be slightly complicated (for example : no immediate symmetric play) to investigate less obvious winning strategies and compare them with the results of algorithms.